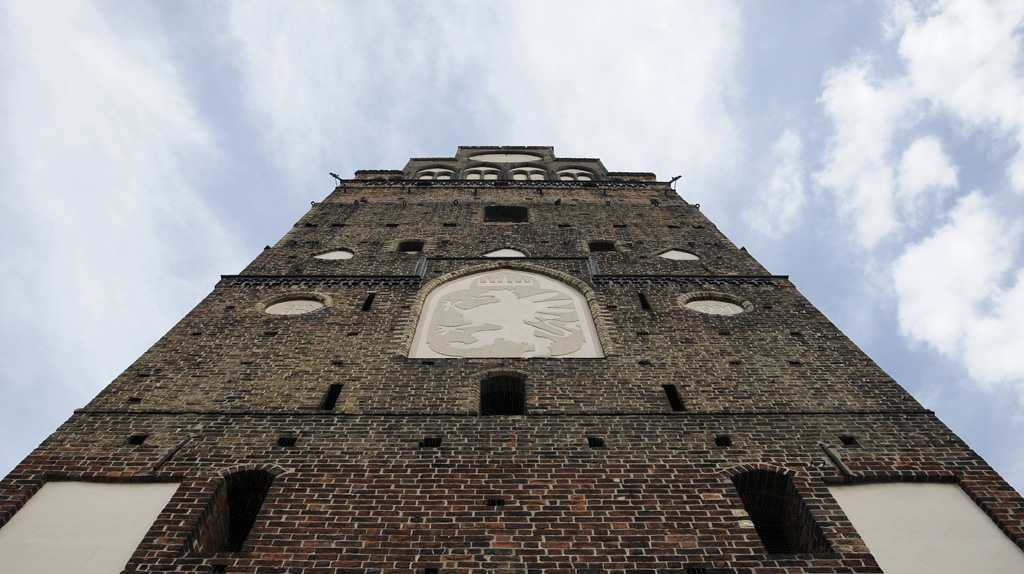 The Kröpeliner Tor (Kroepeline Gate) is a landmark of our Hanseatic city and has, over the centuries, changed its appearance as well as its uses and functions. It is now an historic monument accessible to both the citizens of Rostock and visitors to the city as an exhibition and meeting space.

An example of the Red Brick Gothic

Today’s Kröpeliner Tor is considered to be the most beautiful example of Red Brick Gothic architecture in Rostock. Construction began in the 13th century when the city wall around the original three settlements, which united in 1265, was built. The first mention of the Kröpeliner Tor can be found in documents from the years 1260/1276 as „valva Crapelyn“.

The original gate was only two-stories high, and its purpose was exclusively the defense of the city. Around 1400, due to developing weapons technology, a reinforcement of all the city’s defenses became necessary, and the Kröpeliner Tor underwent the first of its reconstructions. To obtain a better field of fire and more storage space it was raised to six stories, with the addition of wooden battlements around the fifth story. Only a 10-metre-high section of the early Gothic walls remained. This is still recognizable today by the rows of dark red brick above the granite base.

In the following centuries there were repeated structural changes. The city gates, especially in phases of urban prosperity, were not only intended to serve as a defense against enemies but also to represent the wealth and importance of the Hanseatic city. The robustness required for defense had to be combined with architectural-artistic elements. Testimony to this are the impressive embellishments and the staggered decorative gables. Since the Kröpeliner Tor was located on the important trade route between Hamburg and Stralsund, gables were built not only on the field and the city sides but also on the wall sides. During the Thirty Years‘ War the fortifications were strengthened for the last time. Among other things a stone bridge-gate, a gun emplacement with parapet and a ditch system were built. As a result the battlements lost their defensive function and were removed at the end of the 17th century. By the 18th century, the system had lost its importance completely, and the outer parts of the fortifications had to be torn down due to their dilapidated condition.

The Kröpeliner Tor then served only as an armory, but due to its symbolic significance it was not demolished as were many of the other city gates. Instead, a neo-Gothic, castle-like frontage was added in 1847. In the 1860s the central gateway was no longer able to cope with the volume of traffic, so the side-wings of the new frontage were breached to provide better access. During the Second World War the original structure remained undamaged, but the later additions and the surrounding area suffered considerable destruction. So in 1947, the remnants of the neo-Gothic walls were removed leaving the gate standing in isolation. Even the remaining part of the city wall did not quite reach it.

In 1965 the city decided to turn the Kröpeliner Tor into a museum open to the public. Extensive renovations and conversions were necessary for this. The work lasted from 1966 to 1969, and during this time the plans were changed again and again. Critical points were the condition of the wood-beamed ceilings, the guarantee of fire protection and access to the upper floors via a staircase. The concrete ceilings and the glazing of the archways date from this period. The gate was opened as the Museum of Cultural History on 11th June 1969. On the six floors there were permanent exhibitions on the history of the city together with changing special exhibitions.

In 1988 gross structural defects were found including the risk of collapse of parts of the façade and the gables. In 1989 the gate was closed, and from March 1990 to 1991 measures to secure the structure were put in place.

The museum was able to re-open and maintain its operations until September 2004 when the financial situation of the city led to its closure. The danger of the Kröpeliner Tor passing into the hands of outside interested parties was eliminated by a bi-partisan decision of the City Council. So the City remained the owner of the gate, and from April 2005 its use was granted to the Rostock History Workshop, whose members, together with interested citizens in both full-time and voluntary commitment, ensure that the building remains open.

For Children under 6yrs entry is free

This website uses cookies to improve your experience while you navigate through the website. Out of these, the cookies that are categorized as necessary are stored on your browser as they are essential for the working of basic functionalities of the website. We also use third-party cookies that help us analyze and understand how you use this website. These cookies will be stored in your browser only with your consent. You also have the option to opt-out of these cookies. But opting out of some of these cookies may affect your browsing experience.
Necessary immer aktiv
Necessary cookies are absolutely essential for the website to function properly. This category only includes cookies that ensures basic functionalities and security features of the website. These cookies do not store any personal information.
Non-necessary
Any cookies that may not be particularly necessary for the website to function and is used specifically to collect user personal data via analytics, ads, other embedded contents are termed as non-necessary cookies. It is mandatory to procure user consent prior to running these cookies on your website.
SPEICHERN & AKZEPTIEREN